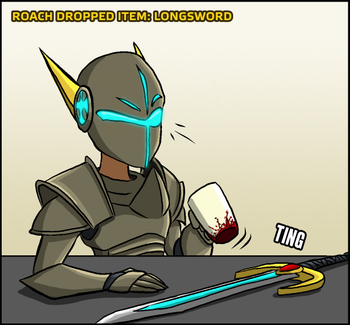 "You're a squirrel that somehow has money, and sometimes swords and shields."
— Final Fantasy with lyrics

Plenty of enemies in games drop items when they are defeated.

Sometimes, this can present a bit of Fridge Logic as to why the enemies have those items. What exactly are those slugs doing with a sword and tunic? And how do monsters have ammo for your weapons (which they obviously never use), but not ammo for weapons you haven't found yet? Furthermore, monsters will tend to drop items associated with their specific abilities. For example, a monster with a petrifying gaze will commonly drop a de-petrification potion, implying that the monsters are actually made of the stuff, in convenient, easy-to-use form.

A potential way to explain this is that killing these monsters is obviously the popular thing to do and somehow they aren't all extinct. Maybe that's because some people aren't as good at it and got eaten along with their stuff. Perhaps they just didn't use that de-petrification potion in time. This doesn't explain how an enemy could have some items that should be readily visible, like in the page image. At other times, it makes no sense that they weren't using that deadly Randomly Drops Infinity -1 Sword before they died.

Sometimes Loot Command or Loot-Making Attack may avert (or, rarely, justify/enable) this trope.

Money Spider is a subtrope for the specific case of animals dropping money. Contrast Unusable Enemy Equipment, where your enemy is carrying weapons that you can't pick up when he's dead, and Organ Drops, where enemies only drop things that are part of their anatomies. Subtrope of Random Drop.