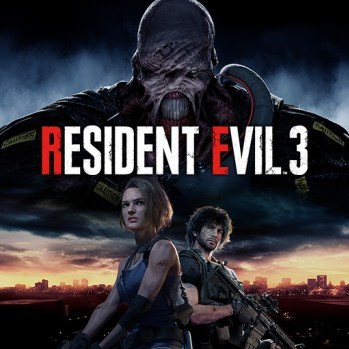 Resident Evil 3 (Biohazard RE:3 in Japan) is a Video Game Remake of the Survival Horror classic Resident Evil 3: Nemesis, developed by Capcom for PlayStation 4, Xbox One and PC. It released on April 3, 2020.

Like Resident Evil 2 (Remake), the game was built on the RE Engine used by Resident Evil 7: Biohazard, and features a similar photorealistic graphic style and user interface, but with a third-person camera similar to Resident Evil 4. The game will also be bundled with a 4-versus-1 multiplayer mode titled Resident Evil Resistance.

On March 2, 2022, it was announced that the game will be brought to the PlayStation 5 and Xbox Series X|S, with existing owners of previous generation versions eligable to upgrade for free. The PC version will be updated as well to take advantage of newer graphics hardware. The new versions and the PC update was released on June 13, 2022.

note  from the end of the demo , Jill Valentine Trailer

The remake provides its own unique examples of:

"It Gets Worse Every Night..."

Shaken by the events at Arklay Mansion, Jill Valentine suffers from harrowing nightmares...

"It Gets Worse Every Night..."

Shaken by the events at Arklay Mansion, Jill Valentine suffers from harrowing nightmares...