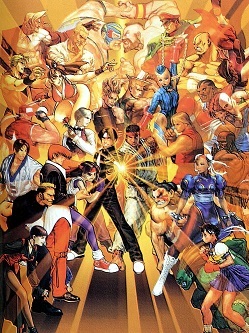 Time to settle the score once and (free) for all.
"Everybody rumored... Nobody believed... But you see, it's true!"
— Opening narration to Capcom vs. SNK
Advertisement:

During the height of the fighting game popularity, one of Capcom's biggest competitors was SNK, creators of the Neo Geo console and arcade system, who challenged Street Fighter's dominance with a wide array of linked and standalone games and series, culminating with their own Massive Multiplayer Crossover, The King of Fighters. Naturally, in 1999 and 2000, the inevitable happened, and the two companies came together to both make separate fighting games based on the concept.

The fighting games of this series, so far, are these:

SNK also developed three Card Battle Games based on the concept (the Card Fighters Clash series), the most recent for the Nintendo DS ending the SNK series as a whole and notoriously containing a Game-Breaking Bug.

While no direct sequels were made to any of the games here since the late 2000's, Capcom and SNK characters went on to have Guest Fighter appearances in other games:

Examples of the series in general: