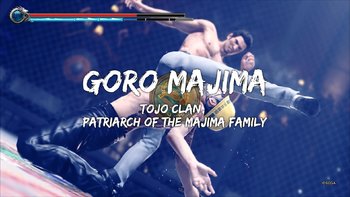 "Dispatched in mankind's darkest hour, we are the knights of the blue flame!"
— The creed of the Novus Orbis Librarium, recited at the start of any match between Jin, Noel, Tsubaki, Hazama, or Makoto, BlazBlue
Advertisement:

Just before the actual fight, characters tend to give a short introduction. Usually a cool pose or quote that'll make them somewhat more memorable. As a way of adding characterization, they will often have characters with a shared history perform entirely different actions when facing each other.

Some games may instead give the characters a voice clip that, like above, may change depending on who they face.

Versus Character Splash is a visual subtrope wherein both sides are posing facing each other. See also Witty Banter.

Since this is so prevalent, only special cases or aversions should be noted.