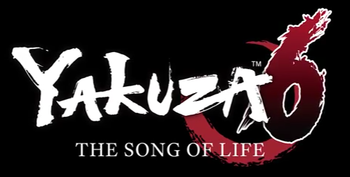 The legend of the Dragon of Dojima ends.
"Haruka, Haruto, and the others... they mean more than the world to me. If it means keeping them safe... I'd gladly give my life."
— Kazuma Kiryu
Advertisement:

Yakuza 6: The Song of Life, known in Japan as Ryu ga Gotoku 6: Poetry of Life, is the seventh main series entry in the Yakuza series following the prequel Yakuza 0, and is the final installment to feature Kazuma Kiryu in the lead role. It was released in Japan as a Playstation 4 exclusive in December 2016, and released in the West in April 2018. PC (via Steam and Windows Store) and Xbox One ports were released on March 26, 2021.

Taking place four years after the events of Yakuza 5, Kiryu has spent the last three years in prison in order to clean his slate and his conscience. When he is released, however, he learns that his adopted daughter, Haruka Sawamura, has disappeared without a trace. Just before he was sent to prison, she had announced not only her retirement from her career as an Idol Singer, but also that her father was none other than the infamous Dragon of Dojima. The public backlash against her was so severe that she left in order to spare her family at the Morning Glory Orphanage any grief on her behalf. He tracks her down to Tokyo, only to find that she had been involved in a hit-and-run collision that has left her comatose.

Kiryu learns that Haruka was protecting a baby during the attempted hit, and learns the child's identity: Haruto Sawamura, Haruka's son. With the identity and whereabouts of the infant child's father unknown, Kiryu takes Haruto under his care. He then learns that before her accident, Haruka had traveled to Jingaicho, Onomichi, a coastal town in eastern Hiroshima and home of the Yomei Alliance, a crime syndicate so powerful that the Tojo Clan and Omi Alliance could not even touch them. Kiryu now finds himself walking into unknown territory, into a city that no one from the Tojo Clan has set foot in.

To what lengths is Kiryu willing to go to help his family? Why is the Yomei Alliance after Haruka's son? And what fate awaits the Dragon of Dojima?

Billed as the "final chapter of Kazuma Kiryu", Yakuza 6 features a brand new engine, built from the ground up to take full advantage of the Playstation 4. In addition to Kiryu's stomping grounds of Kamurocho, players will now travel to the Hiroshima town of Jingaicho, a completely new setting that differs greatly from the massive urban playgrounds of previous games. Battles now begin and end seamlessly, store interiors can become battlegrounds, and characters react more realistically when attacking and being attacked. Players can also switch to a first-person camera view when travelling through the cities, allowing them to take in the environment in a brand new way, as well as take advantage of various nooks and crannies in the city to discover new locations. In addition, the slew of minigames and diversions for which the Yakuza series is so famous has been expanded upon, with returning classics such as hostess clubs, gambling parlors, batting cages, and video arcades (now including Virtua Fighter 5: Final Showdown and Puyo Puyo) joined by new, oddball activities such as cat cafes, chatting with camgirls, managing a baseball team, and deep-sea diving.

Sony's partnership with Sega in publishing the series overseas starting with Yakuza 5, as well as the massive hype surrounding the American and European release of Yakuza 0, lead to the simultaneous announcement of Yakuza Kiwami, the enhanced remake of the original Yakuza, and Yakuza 6 coming to the west.

Although series creator Toshihiro Nagoshi has stated that this was the end of Kiryu's story, the series would continue on. Following the game's release, numerous games were announced: Shin Ryu Ga Gotoku, a mobile spinoff, introduced the series's new protagonist, Ichiban Kasuga, who would also serve as the leading man for the seventh main series entry, Yakuza: Like a Dragon. A spin-off, Fist of the North Star: Lost Paradise, based on the popular manga, combines the characters and settings of that series with the gameplay and humor found in the Yakuza series, and features many of the same voice actors such as Takaya Kuroda as the voice of Kenshiro. Yakuza Kiwami 2, a remake of Yakuza 2 utilizing an improved Dragon Engine, which also introduces a mini-campaign that has Goro Majima playable once more, which explores his departure from the Tojo Clan. Re-releases of Yakuza 3, Yakuza 4, and Yakuza 5 bring the entire saga of the Dragon of Dojima to the Playstation 4. Finally, Judgment begins a new story in Kamurocho focusing on Private Detective Takayuki Yagami in a spin-off title that takes place in a post-Kiryu world.

Yakuza 6: The Song of Life/Ryū ga Gotoku 6: Poetry of Life includes examples of: