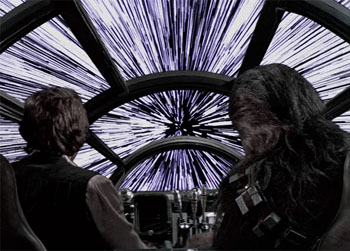 Real spaceships transiting the void would move at incomprehensible speeds, however you wouldn't know that by looking out the window. In media, this is unacceptable. A moving object must give the impression of speed and motion.

Enter the streaming star field. Look out the window or canopy of any TV or movie spaceship and you'll see a background of stars flowing past like telephone poles. This happens whether the spaceship is moving at sub- or super-luminal speeds (though super-luminal velocities will have some additional effects).

As Douglas Adams pointed out, space is big. This means that stars are really far away. Galaxies are even farther out. There will be very little Motion Parallax in a star field seen from a spaceship moving through the solar system or even between nearby stars. In captain dummy talk, that means you simply won't see a star move in relation to you, unless you're a) within said star's solar system (and then it'll just be the one), b) moving really, really fast, like cross-the-galaxy-in-a-day fast, or c) turning. Anyone who's driven down a long highway in a wide flat area can see this effect to a lesser extent: that mountain far to your left doesn't really seem to move much as you go. Our sun, and even just the Moon, which is much closer, give an even better example; they don't seem to move at all as you move.

In fact, even if you flew so fast that you could see star movement (but still sub-luminal), the actual view would surprise you: the stars before you would brighten and concentrate in the center of the field of view, while the ones behind you would dim and diverge all over the field of view.note While light from the stars ahead of you would indeed blue-shift, this effect would apply to the entire EM spectrum, so that IR wavelengths would be shifted into the visible spectrum. Likewise, the red-shift of stars behind you would shift UV wavelengths into the visible spectrum. In either case, the perceived colors of stars would change very little. If you accelerate to this speed quickly (without dying from the huge amounts of acceleration required), the end result would give the impression that you are moving backwards.

Of course, from a production standpoint, even if you averted this trope, you could theoretically still convey motion with the starship moving across the screen, though probably not in a way that says "warp speed". Video games often get around this by having particles of space dust that will naturally fly past the camera to convey movement, but of course this can't apply to FTL speeds either.