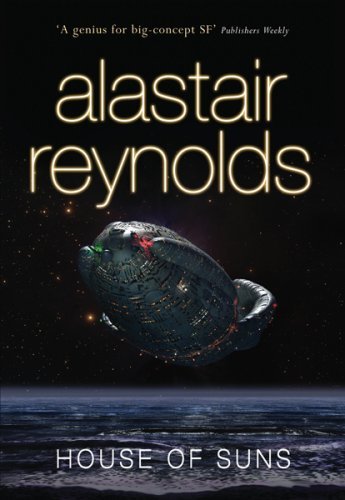 House of Suns is a novel by Welsh sci-fi author Alastair Reynolds, set in more or less the same universe as the novella Thousandth Night

Six million years in the future, the entire galaxy is a Used Future. Tens of thousands of human civilizations have risen and fallen. The galaxy's been united under a single banner too many times to count. In the face of deep time, each galactic federation always falls. No one group endures.

Except the Lines. Individually known as "shatterlings", the Gentian Line is composed of slightly under a thousand clones made from a woman who lived in the 31st century. They individually roam the galaxy, traveling from star to star near the speed of light, skipping over the ages via time dilation. Their purpose is to explore and catalogue civilizations. Every quarter-million years they all come together to share their experiences and combine their knowledge. They've existed for the past six million years, witness to the constant grind of civilization.

Campion and Purslane are two shatterlings who are running late to the most recent Line reunion, having been delayed for a variety of reasons. Fortunately, during their travels, they manage to rescue an amnesiac android named Hesperus. Returning him to the Machine People, a society of advanced robots, would put the Gentian Line on very good terms with them, so Campion and Purslane figure that will excuse them for their lateness to the Reunion.

Things aren't quite what they seem. Hesperus is discovered to have a human arm underneath his metal exterior, a fact that even he can't explain due to his amnesia. And another guest of theirs mysteriously dies during the journey to the reunion. But worst of all is that when they get to the Reunion planet, they find it utterly wiped out. Turns out, someone is attempting to wipe out the Line. Someone who has intimate knowledge of the Line's secrets, and who keeps a very long grudge.

No relation to the sci-fi game House Of The Dying Sun. It also has no direct relation to Crying Suns, although the latter operates from a similar premise.