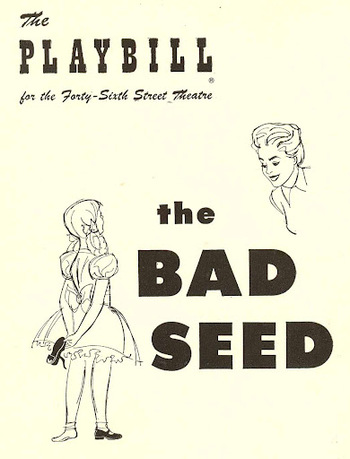 William March's 1954 thriller novel The Bad Seed was adapted into a stage play by Maxwell Anderson later that same year. This version is the one which was subsequently made into a feature film in 1956, and a made-for-TV remake in 1985.

Christine Penmark, a housewife, moves into a new town with her husband Kenneth and daughter Rhoda. Christine has always thought her daughter was very peculiar; while always polite, courteous, and charming in public, there was a cold, apathetic, and calculating quality in her personality that she found very disturbing in a child. As Christine notices the strange, horrible things that happen in the proximity of her daughter, she comes to see that Rhoda is the very definition of an Enfante Terrible.

As with the source novel, this was one of the earliest and more notable examples of a child being portrayed as irredeemably evil, and delves into the issue of nature vs. nurture as Christine discovers the truth of her own origins.

The play was nominated for the Pulitzer Prize for Drama, losing out to Cat on a Hot Tin Roof. The original Broadway cast included Nancy Kelly as Christine, Patty McCormack as Nancy, Henry Jones as Leroy Jessup, Evelyn Varden as Monica Breedlove, and Eileen Heckart as Mrs. Daigle; all would reprise their roles in the 1956 film.