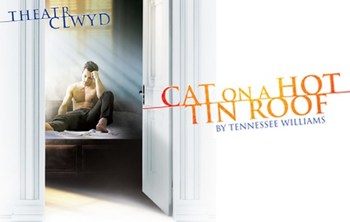 A 1955 play that won Tennessee Williams his second Pulitzer Prize, Cat on a Hot Tin Roof has endured thanks to numerous productions ever since. Its best-known adaptation is the 1958 feature film directed by Richard Brooks, starring Paul Newman, Elizabeth Taylor and Burl Ives. There is also a 1976 Made-for-TV Movie adaptation starring Natalie Wood, Laurence Olivier and Robert Wagner.

The story concerns the Pollitt family, and all the ugly family issues that rear their ugly heads as they reunite for the birthday of its patriarch, Big Daddy. Big Daddy, unaware that he's dying of terminal cancer, tries desperately to connect to his angry, alcoholic favored son, Brick, who is married to Maggie. Meanwhile, the other family members try desperately to suck up to Big Daddy to get some of his fortune. Of course, tensions between father and son have to be resolved some time...