Corruption by a Minor 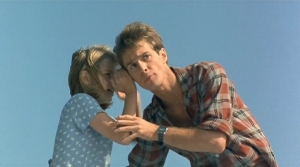 Don't listen to her, Trent!
Advertisement:

Under US law (and other countries as well), there is a crime known as Corruption of a Minor, in which adults coerce or help children to commit crimes.

This is the inverse.

Sometimes children can convince adults to break the law. But they're such innocent little darlings! How on earth is that possible? They could turn on the charm, particularly on a gullible adult or one with low self-esteem, or one who just likes kids and wants to be nice, or maybe one who sees the kid as an equal or a friend. Other times, the kid simply bribes the adult. This is pretty much the favourite technique of the Enfant Terrible.

See also Troubling Unchildlike Behavior, Kids Are Cruel, Deliberately Cute Child, From the Mouths of Babes, Corruption of a Minor, and Enfant Terrible.