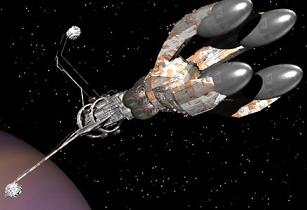 All spacecraft in existence today work based on Newton's third law — for every action there is an equal and opposite reaction. Most toss stuff out out the spacecraft's back, creating a reaction force that accelerates the spacecraft forward.note Differences in engines mostly deal with what's thrown out the back, how hard it's thrown, and what you use to throw it. The rest rely on stuff thrown at the spacecraft and driving it forward as it's hit, even if that "stuff" is just sunlight.

This means that current, real-life spaceships either—

Most Science Fiction authors, however, are writing about spaceships because they want to write about humans going places in them. They don't want to write about reaction mass, so Science Fiction writers would prefer spacecraft to have much more of their volume dedicated to human activities. They typically want their spaceships to be able to operate within convenient distance of someplace interesting, rather than turning half the town into slag as they land and the other half as they leave. They want their spacecraft to flit from one Planet Ville to another, not just tool around wherever an earthbound laser can be shined on them. They DEFINITELY want it to go fast enough to get someplace interesting before everyone aboard dies of boredom. note Yes, even in hard sci-fi where they're all going slower than light; you still want to be able to at least reach other planets in the same star system.

A reactionless drive or reactionless engine is a piece of advanced technology invented to make life easy for those Science Fiction writers.

For our purposes it is sufficient to define the drive as follows: "any form of self-contained propulsion not based around expulsion of fuel or reaction mass". In other words the drive will propel a vehicle, almost always a starship, anywhere it wants to go without having to waste space carrying propellant. Sometimes authors will try to control these drives by requiring a power plant to make it keep working but more than a few will keep working forever.

Obviously this would be an awesome invention! So why don't we have them? Well, naively it would shatter the fundamental basis of all physics since Isaac Newton, as detailed here,

and modern theories predict effects too small to be useful. Thoughtful Speculative Fiction writers have also noted that any sort of reactionless drive would provide those who possess it with an infinitely powerful weapon (compare Weaponized Exhaust, which is the use of a reaction drive as a weapon). Note that this would not be a problem if they required truly massive amounts of power note  to accelerate at 1G a "photon drive" would need ~2.9TW per ton, or 32mg worth of mass converted to energy per second but many examples don't.

Some writers try to sidestep this potential danger by setting a maximum speed that the drive can go. Unfortunately while this eliminates the possibility of an infinitely powerful missile it still leaves the developer with an infinitely powerful energy source leaving the writer with most of the same problems. Other times, it may be limited to Higher-Tech Species or Sufficiently Advanced Aliens who presumably have some scientific understanding beyond the ken of "lesser races".

Supertrope of the Alcubierre Drive. The Ramscoop and Solar Sail are sister tropes; each is a plain old reaction drive, but one that uses a clever trick to react with the ambient environment instead of needing to haul extra mass or stick to a base station. It is also very common for an incautious (or sneaky!) author to write something that's allegedly one of those two, but from the way it's described working is really a reactionless drive in disguise. The energy used to power one is sometimes derived from Antimatter annihilation, or the ship can be Powered by a Black Hole—and sometimes the black hole is the drive.