Literature / We Are Legion (We Are Bob) 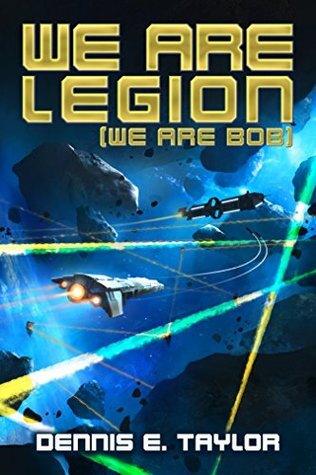 "All that's really missing is a good artificial intelligence to control the whole process. And that's the trick, isn't it? These types of blue-sky discussions always assume certain advances for a successful implementation. Unfortunately, A.I. is the bottleneck in this case. We're close with the replication and manufacturing processes, and we could probably build sufficiently effective ion drives if we had the budget. But we lack a way to provide enough intelligence for the probe to handle all the situations that it could face."
— Eduard Guijpers, from the convention panel Designing a Von Neumann Probe
Advertisement:

We are Legion (We Are Bob) is a 2016 Science Fiction novel of some acclaim, written by Denis E. Taylor, which asks the question "What would it be like to be a Von Neumann Probe?". It's also the first entry into the Bobiverse; the sequels are For We Are Many, All These Worlds, and Heaven's River.

In 2016, Robert Johansson, an engineer and programmer, signed up for a cryo-storage company following a sudden windfall of cash. The company would freeze his head in the event of his death, to be restored once technology advanced enough. Before the end of the day, Bob gets hit by a car, is pronounced dead, and his head collected.

He wakes up a hundred and thirteen years later as a digital copy of the original Bob, one of five replicants made from different people, all made in the hopes that one will be able to pilot a Von Neumann probe. Despite some unexpected political turmoil, Bob manages to survive Earth and escape the Sol system intact, then begins creating more Bobs. The Bobs then proceed to explore the galaxy, finding new worlds and life, find out what happened to Earth while facing hostile probes and other threats.

And then things get interesting.