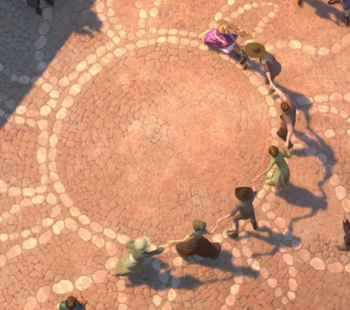 Here, we go 'round the mulberry bush...
Advertisement:

During the course of the movie, show etc etc... the characters somehow end up being in a crowd with some nice music. Alice wants to dance, and so she does... then pulls Bob. When Bob was being drawn, he pulls Clair. And while doing so, Clair grabs Emely, and so on and so forth, until almost everyone is in the dance.

This is the Dance Line - wherein people who normally weren't dancing earlier dance because they are pulled in, and in doing so pulls another one from the crowd. Singing isn't required, but when it does, it may soon end up with a Crowd Song. Bonus points if Bob or the others cannot dance.

Related to Crowd Song. Usually a form of Happy Dance. Compare Dances and Balls; because your typical dance has people watching, talking, resting, or taking refreshments as well as dancing, it can occur at one, but it's rare.

Amethyst and the other Famethyst perform a conga line while in the zoo.

Amethyst and the other Famethyst perform a conga line while in the zoo.