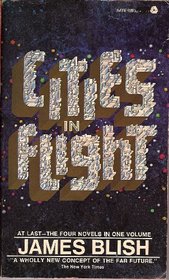 Cities in Flight is a series of Science Fiction stories and novels by James Blish. Originally four volumes, it was later released as an omnibus edition under the series name.

The original volumes, in internal chronological order, are:

The series is a grand, sweeping epic, based on the development of a form of Applied Phlebotinum called "the Spindizzy drive", which provides cheap artificial gravity, force-fields, and faster-than-light travel. So cheap and powerful is the Spindizzy that most of the major cities of Earth decide to take off and head for the stars.