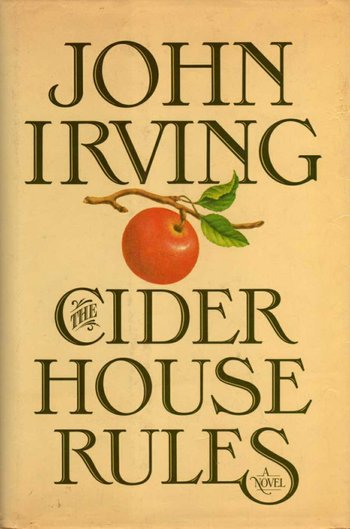 Referred to as his "most didactic novel", The Cider House Rules (1985) is the sixth novel by John Irving. It centers around the story of Homer Wells, an orphan in the Maine town of St. Cloud's, and his caretakers: the resident doctor and head of the boy's division, Dr. Wilbur Larch, and his two aides, Nurse Angela and Nurse Edna. Dr. Larch raises Homer and trains him in obstetrics, but Homer is reluctant due to his mentor's performance of illegal abortions at the hospital, which Homer is morally opposed to. The novel highlights the importance of personal convictions and purpose and weighs the two sides of the abortion debate.

The book was made into a 1999 film directed by Lasse Hallström and starring Michael Caine, Tobey Maguire and Charlize Theron.