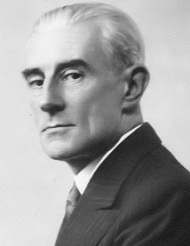 Joseph Maurice Ravel is a French composer (7 March 1875 — 28 December 1937), best known for his Bolero, despite his considering it a minor piece of work and joking that it had "no music in it".

He's popularly considered a cornerstone of the Impressionist movement in music, along with his fellow composer, Claude Debussy, though neither of them considered themselves as Impressionists and were actually offended by the label. Nevertheless, his music contains very colourful tones and sounds, flows very freely, and is very atmospheric, suggesting to some an aural kinship with Impressionist painting. He also wrote other pieces that are best considered Neo-Classicalnote Classical music which follows traditional structure, but has modern harmonic elements in it. Regardless, he's considered as one of the major figures of early 20th century classical music, and is widely popular among listeners for his lush and beautiful, yet controllednote Unlike Debussy musical landscapes.

Notable pieces include Jeux D'Eau, Daphnis Et Chloe, Pavane Pour Un Infante Defunte, Le Tombeau De Couperinnote A neo-classical example, and the Concerto in G for piano and orchestranote Influenced by Jazz. He wasn't quite prolific, but was able to build international fame because most of his music was widely acclaimed, both by serious critics and popular listeners. One of the last great composers faithful to the old classical style, before everything classical becomes either atonal, serial or minimalist. He was also a great supporter of Jazz, considering it to be worthy of being an artful musical genre, and the national music of the United States. After the death of Debussy, he was the greatest French composer of his period.

Like his music, Ravel was reticent in nature. Interestingly known to have no (known) romantic or sexual relationships, much to the composer's chagrin and loneliness — although he was surrounded by a large circle of faithful friends and followers, who later provided support during his last four years when he was affected by a neurological illness that prevented him from playing or writing any other music. After a failed operation, he died after falling into a coma. His death was greatly and unanimously grieved in the artistic circle - a year after his death, the Revue Musicale published a special edition containing around 100 articles paying homage to the late composer.

He was also an accomplished orchestrator, considered one of the best in the history of western music; his orchestration of Modest Mussorgsky's suite Pictures at an Exhibition is arguably better known than the piano-only original.

Trope Namer for the Boléro Effect.

Tropes that apply to Maurice Ravel's life and work include: