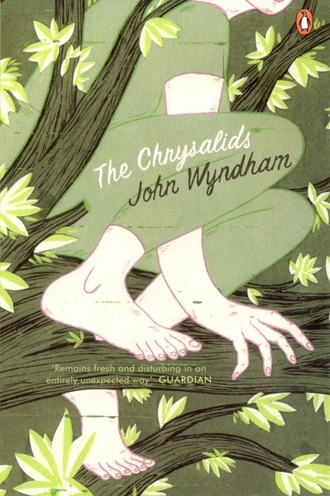 "And any creature that shall seem to be human, but is not formed thus is not human. It is neither man nor woman. It is blasphemy against the true Image of God, and hateful in the sight of God."
Advertisement:

The Chrysalids is a Science Fiction novel written by John Wyndham, first published in 1955 and considered by many to be his masterpiece.

Many centuries after a global nuclear apocalypse, northern Labrador and 'Newf' are among the few places hospitable to human habitation, albeit very pre-industrial. Our story centers around the small farming community of Waknuk, ruled with an iron fist by fanatical Sinister Minister Joseph Strorm.

The only document that has survived from the time of the 'Old People' is the Bible, from which the current generation infer that 'Tribulation' must have been a final, devastating judgement on human arrogance, a la the fall of Jerusalem. Taking this together with a later book called Repentances, this new society develops what they believe to be the immutable Definition of Man, and aims to rebuild the world accordingly in the True Image of God.

In this theology born of ignorance and fear, any radiation-bred mutant (or 'Deviation') — no matter how slightly abnormal — is interpreted as either an Offence (plants, lower animals) or, more horribly still, a Blasphemy: a human-shaped but soulless mockery of God's perfection sent by Satan to lure Man off the faint and narrow path to righteousness. They all must be ruthlessly rooted out and destroyed lest they contaminate the purity of Godly society. In the case of Blasphemies, there is just enough mercy that they are merely sterilized and banished (usually at birth) to the wild country known as the Fringes, to survive or not as they can.

Against this backdrop our narrator, Joseph's son David, discovers along with several other children that they have a mutation that is not visible to the naked eye: they are able to communicate with each other by means of telepathy, or "thought-shapes". The story centers first on their efforts to conceal this ability, then their struggle to define it against what they and others understand as the Norm...

...and then, finally, on their efforts merely to defend themselves at all costs. Because as much as their society loathes the deviants they can see and thus control, the notion of ones they can't terrifies them into all-out racial war — a war which may only ultimately be winnable by a civilization still more ruthlessly determined to survive.

The Chrysalids provides examples of: