Literature / The Corpse of Charlie Rull 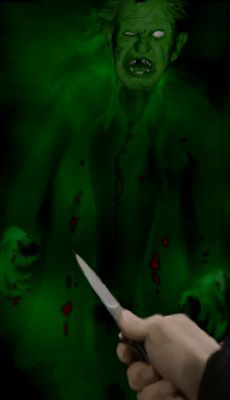 The Corpse of Charlie Rull is a 1959 short horror story written by Joseph Payne Brennan, originally published in The Dark Returners but also featured as the second story in 1980's in The Shapes of Midnight. It tells the short, horrific tale of homeless heart attack victim Charlie Rull who falls into a swampy pool saturated with radioactive chemicals unintentionally leaked from a laboratory near the dump where he lived. The radiation resurrects Charlie as an inhumanly strong zombie. Remembering nothing of his former life, Charlie feels only the pain of the radiation burning through his undead body. Filled with a vicious hatred for all other life, he proceeds to go on a murderous rampage through the nearby town of Newbridge.
Advertisement:

As with Slime, a great audio version read by Edward E. French can be found here

Tropes used in this story: