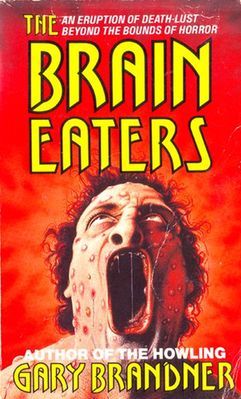 A 1985 science fictior/horror novel written by Gary Brandner, who also wrote The Howling. People in Milwaukee begin experiencing a bizarre skin affliction, causing them to be covered in shiny, boil-like pustules; worse, they begin exhibiting homicidal urges. Workman Hank Stransky goes insane in a bar and kills several people. An afflicted taxi driver runs pedestrians over. A woman murders her husband before leaping to her death through a window. Intrepid Reporter Corey Macklin of the Milwaukee Herald is on the case!
Advertisement:

Investigating Biotron Laboratory in Appleton, Macklin discovers that there has apparently been some kind of mixup. Helicopter pilots were supposed to spray crops with an experimental pesticide, but the canister they used contained instead a Bioweapon consisting of wormlike parasites that devour their victims' brains and turn them into homicidal maniacs. But was it really an accident that the pilots grabbed the wrong canister? Despite being pressured by his editor at the Herald to kill the story, Macklin is determined to get to the bottom of things before it's too late.

No connection to the 1958 Roger Corman film of the same name. And definitely not to be confused with the sci-fi fandom term "The Brain Eater".