Literature / The Boys from Brazil 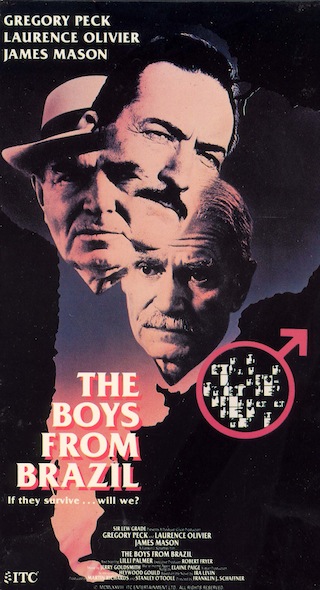 A Simon Wiesenthal Center operative finds something big. All around the world.

A 1976 novel by Ira Levin, it was adapted into a 1978 film directed by Franklin J. Schaffner, starring Laurence Olivier (in his last Academy Award-nominated role) as Nazi hunter Ezra Liebermann and Gregory Peck as Dr. Josef Mengele. The score, which was also nominated for an Oscar, was composed by Jerry Goldsmith.

In Brazil in 1974, a young busboy finds himself serving a table full of jovial, elderly German ex-pats in the midst of a celebratory dinner party. The busboy overhears a sinister conversation: these men are former Nazis who are planning the assassination of 94 civil servants around the world, motives unknown. But the busboy is no busboy. He manages a single phone call to Ezra Liebermann, who runs a secret network in Vienna dedicated to tracking down fugitive Nazis and bringing them to justice. Before their conversation can end, the busboy is murdered.

Based only on this chancy information, Liebermann rallies his best spies to track down clues, both in hopes of saving the 94 victims and to discover the reason why they were targets. Some of them have already been killed. More are dying every day. But another, even stranger piece of the puzzle soon arises: thirteen years ago, every targeted family adopted an infant from Brazil, innocent children created by the Angel of Death himself, Josef Mengele, as part of a twisted plan to bring about a new Reich with a new leader.

Alternative Title(s): The Boys From Brazil