Widowed at the Wedding 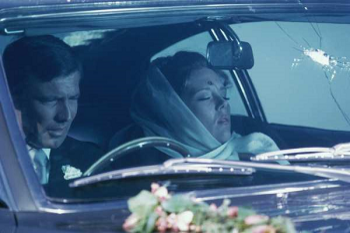 Weddings are kind of a big deal in human society and the newlyweds are expected to live Happily Ever After together. Except sometimes, they don't.

This trope is about characters whose spouses die during or just after their wedding, either naturally or violently, leaving them widowed before they were even really married and heavily traumatized for the rest of their life. The violent death variation is often used for a sudden Downer Ending, though it can be foreshadowed with It's Not You, It's My Enemies. May involve a Blood-Splattered Wedding Dress.

See also Black Widow for when the death is at the hands of the bride and The Bluebeard if it's the groom. Out with a Bang might also be the cause, if it's on the wedding night (and is often used if the groom is much older and might have a heart condition). May lead to The Lost Lenore, Crusading Widow and Wight in a Wedding Dress. A distant relative of Retirony, and extreme form of the Cartwright Curse. Can be a particularly dramatic form of Speak Now or Forever Hold Your Peace, for when And Now You Must Marry Me requires an especially definitive counterargument.

Since this is a Death Trope, spoilers ahead!

The Wolf was the sole survivor of a mass poisoning that killed everyone at his wedding, including his bride.

The Wolf was the sole survivor of a mass poisoning that killed everyone at his wedding, including his bride.