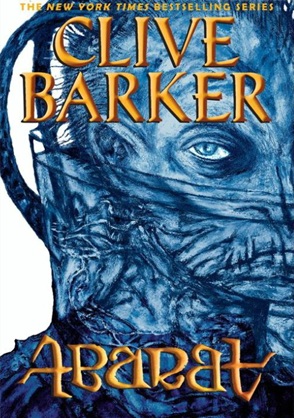 Abarat is an as-yet unfinished Young Adult fantasy quintet (of which so far only the first three books have appeared: Abarat, Days of Magic, Nights of War, and Absolute Midnight—the intended sequel of which is tentatively titled "Kry Rising") written and illustrated by one Clive Barker.

The books follow the adventures of a young woman named Candy Quackenbush. She hails from the small town of Chickentown, Minnesota, a tiny burg with a higher population of its eponymous fowl than people. She longs for something more than her small-town life, but doesn't know where to find it. One day, a strange compulsion grips her, and she races to the outskirts of town. There, she finds a strange man named John Mischief, whose brothers live as heads sprouting out of his impressive antlers, who is running from a strange, gaunt man named Shape. But through the powers of a magical lighthouse, she manages to summon a sea from nowhere—and from there, she is carted off to the Abarat. The Abarat is an archipelago where every island is an hour of the day, and it is full of strange, wonderful creatures. But sinister beings lurk in the shadows, and they have impure designs on Candy...

Perhaps the most noticable aspect of the books is that they are all lavishly illustrated by Clive Barker himself with hundreds of full-color paintings, on glossy paper. They're a visual trip as well as a mental one. While Vanilla Edition, non-illustrated print runs of the books have been made, the pictures are part of the fun.