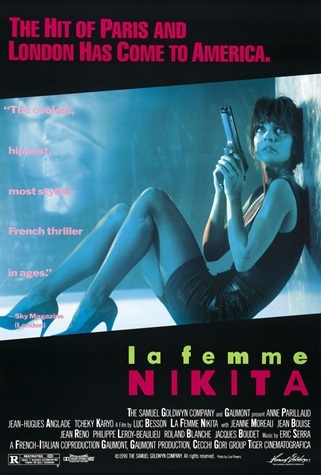 Bob: You died Saturday at 5:00 p.m. The prison doctor confirmed suicide after an overdose of tranquillizers. You're buried in Maisons-Alfort, row 8, plot 30. ...I work, let's say, for the government. We've decided to give you another chance.
Nikita: What do I do?
Bob: Learn. Learn to read, walk, talk, smile and even fight. Learn to do everything.
Nikita: What for?
Bob: To serve your country.
Nikita: What if I don't want to?
Bob: Row 8, Plot 30.
Advertisement:

Nikita (Anne Parillaud) is a young Parisian junkie, who along with her friends holds up a pharmacy and ends up killing a police officer. She is arrested, tried, and sentenced to life in prison, where she's drugged and then wakes up to be told that she has been declared Legally Dead from "suicide" and now has two options: let them kill her off for real, or accept recruitment into a new life working for a shadowy government agency. Where she will be taught how to be a lady, how to be a spy, and how to be an assassin—all in the service of her country.

Remade in Hong Kong as Black Cat (1991) with Jade Leung (as Catherine) and in America as Point of No Return (1993) with Bridget Fonda in the Nikita role, and more loosely remade in Korea as The Villainess. There have been two television adaptations so far: La Femme Nikita with Peta Wilson and Nikita with Maggie Q.

Alternative Title(s): Point Of No Return