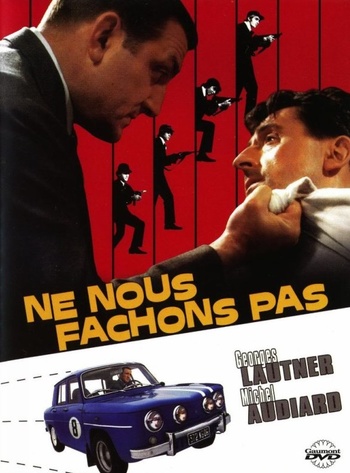 Ne nous fâchons pas (Let's Not Get Angry) is a 1966 French gangster/spy comedy film directed by Georges Lautner. It was the third collaboration between Lautner, writer Michel Audiard and actor Lino Ventura after Les Tontons flingueurs and Les Barbouzes, and is the last installment of that thematic trilogy, the Trilogie des Malfaisants.

Antoine Beretto (Lino Ventura) is a retired gangster who settled in the Mediterranean city of Collioure and opened a nautical gear, scuba diving and boat lending business. One day, two former mob "colleagues" of his come at him to borrow him a large sum of money. He ends up accepting, and the two of them tell him that he can get his money back from a whiny, cowardly and slimeballish bookmaker who owes them money, Léonard Michalon (Jean Lefebvre). Beretto goes to Michalon, only to find out that, for some reason, Michalon's life is threatened by the mysterious McLean (Tommy Duggan), an English colonel commanding over a legion of well-dressed pretty boys. He then has no other choice than to protect Michalon if he wants his money back.