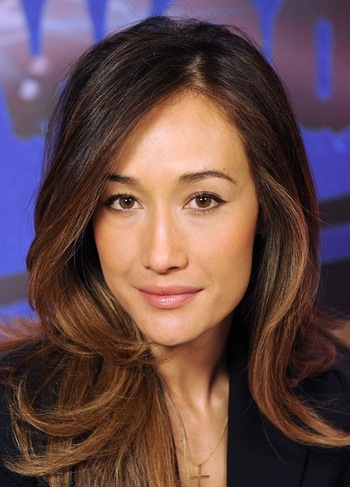 "Not only do I not want to be stereotyped as this Asian girl who fights - gee, what a wonder - but also I have more to offer than that."
— Maggie Q on typecasting
Advertisement:

Margaret Denise Quigley (known to the most of us as Maggie Q, born May 22, 1979 in Honolulu, Hawaii) is an American (of Irish, Polish and Vietnamese descent, via Hawaii) actress and former model. After being scouted by Jackie Chan, she starred in lesser-known films such as Naked Weapon and Rice Rhapsody before going on to roles in Mission: Impossible III and Balls of Fury. She starred as the titular character of Nikita and the protagonist of the short-lived CBS series Stalker, and is also part of the main cast of the ABC series Designated Survivor. She is perhaps known for playing a female spy/action hero/Action Girl in a lot of her roles, and usually doing her own stunts while she's at it.

Maggie's roles include the following tropes