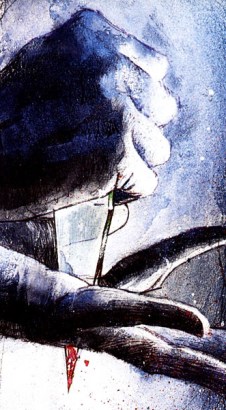 "The enemy cannot push a button, if you disable his hand."
— Drill Sergeant Zim, Starship Troopers

A character has something driven into the palm of his hand (or, occasionally, the back) and right out the other side. Usually a knife, but may be a bullet. Crucially, it is done deliberately and usually (if it's not a bullet), quite slowly.

Related to Fingore. May be caused by a Five-Finger Fillet. May result in Pinned to the Wall.