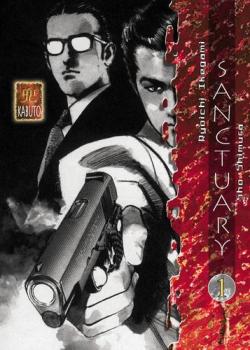 Sanctuary is a Seinen, half Government Procedural and half Criminal Procedural with Yakuza written by Sho Fumimura (a.k.a. Buronson of Fist of the North Star) and drawn by Ryoichi Ikegami (Crying Freeman, Mai, the Psychic Girl, and Spider-Man: The Manga), originally published from 1990 to 1995.

Akira Hojo is a charming, dashing, and ruthless thirty-something leader of a small Yakuza society with his eyes on the top and the ambition and skill to climb the ladder as quickly as he can. Chiaki Asami is the trusted advisor of a member of the Japanese Diet who takes advantage of opportunity to steal his superior's seat and use it to launch a campaign to reform Japanese politics. Little do most know that the Asami's opportunity was arranged by the actions of Hojo.

Hojo and Asami were children of Japanese expatriates in Cambodia in 1975 — the year the extremist Khmer Rouge seized power and tried to roll Cambodian society back to an agrarian "Year Zero", killing anyone who was too intellectual or who got in their way. The pair became Fire-Forged Friends and developed a talent for ruthless practicality in order to both survive Khmer Rouge work camps and eventually escape back to Japan. Disturbed by the peaceful, decadent, and listless state of the Japan they returned to, they agreed that they needed to reshape society into something that they could consider a "sanctuary". Their plan; one of them drops out of high school and joins the Yakuza, providing under-the-table funding and dirty works to support the other as he rises to the top of the political world. (The two played scissors-rock-paper to decide their roles.)

The manga was published in English by Viz Media starting in 1995; they also released translations of the anime OVA and the Japanese live-action film adaptations.

Not to be confused with the live-action TV series of the same name on Syfy.

Sanctuary and its adaptations contain the following tropes: