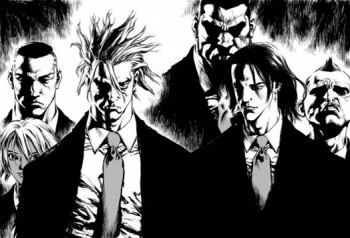 Ken and his friends.
"If a Nation is a Gang, a Gang should be able to become a Nation. I want to establish a Nation of a certain class. Hey, let's build a country of our own. Ken."
— Tae-Soo
"I don't force anyone to follow me. I fight for what I believe in, and to protect those who need my help! I force nobody to fight beside me. Everyone's free to their own opinions! And I fight beside only those who share mine! But I help all those who ask me, and I ask for nothing in return!"
— Ken
Advertisement:

After his parents' death when he was 13, Ken lost everything. He became embroiled in a world of violence, constantly fighting one group of thugs after another. Then he met Yumin, the only person left in his life that he cared for. When Ken finally confessed his love, Yumin turned him down with the reason that she plans on moving to Korea and becoming a police officer. Ken decides to drop out of high school, and flies to Korea in order to become an officer himself. Unsurprisingly, as a high school dropout he doesn't get the job and ends up slumming it in Korea.

One day, after helping out an old store owner getting extorted from a local gang, Ken is then made the boss of a small gang by a man named Tae-Soo. Ken now finds himself fighting local gang bosses, protecting the ones he cares for and making sure Yumin never finds out, otherwise he'll lose the girl he loves and get arrested.

Sun-Ken Rock's South Korean author and artist Boichi, aka Mujik Park, holds the distinction of being one of the few foreign mangaka in Japan. Boichi's other manga, including Wallman, H•E the Hunt for Energy, Space Chef Caisar, and the upcoming The Origin, all take place in the same verse. The manga ran in the seinen magazine Young King from 2006 to 2016, and can be read here

in English at Crunchyroll Manga. The other manga connected to Sun-Ken Rock have been scanlated with Boichi's blessing by Japanzai and are available to read for free on his official site

Has a Character Sheet that is in desperate need of love.