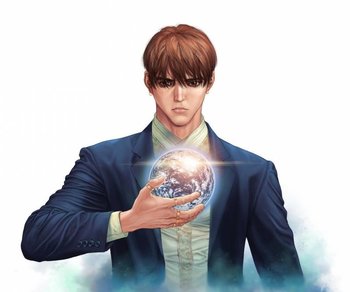 The year is AD 2048. Japan is connected to the Eurasian continent by a transcontinental railroad. The capital, Tokyo, has become a crucible of criminals and terrorists. And so, in the metropolitan darkness a mysterious presence attacks and slaughters people, unnoticed, night after night… Just what are these “things that are not human” living in hiding in the human world? And just who is this “Origin” person who faces them?

Origin manga created by Boichi of Sun-Ken Rock' fame, and published at the same time as his other work Dr. Stone''. Set in the same continuity of his other non-collaborative works, follows the misadventures of Origin, an almost human robot after the death of his father and creator, which told him to "Live properly", with these words as his raison d'etre he embarks on a quest of self-discovery, learn about humans, and live as best as he can.

No one suspects of him, and he does his best, struggling to socialize and to not stand out too much. But as time goes on, several killer robots led by a mysterious "Ken" are on the rise, Origin is the one and only ally of mankind.

It's basically Mega Man, but for adults.