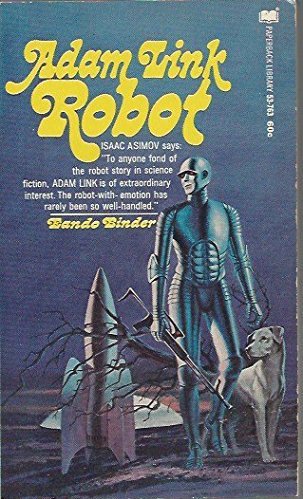 The main character of a series of Golden Age science fiction short stories by Earl and Otto Binder under the pen name Eando Binder (E and O Binder). Otto is the better known of the two, as he later became a popular writer for the Superman and Captain Marvel comic books.

Adam is a robot built and raised by a kindly inventor, Dr. Link. The inventor unfortunately dies in an accident, and Adam is blamed for his death. He is put on trial — itself a dicey proposition, since he isn't human — and is nearly condemned, but he manages to vindicate himself in his accusers' eyes by risking his life to save a little girl from an onrushing car. He then spends the subsequent stories having adventures of various sorts, eventually gaining a robot girlfriend (named Eve, of course), all while trying with limited success to gain the trust of the humans around him.

Adam comes across as a very sympathetic character, the story being essentially an analysis of what the Frankenstein monster might have become if his creator had acted as a loving and responsible father instead of a jerk. The original "trial" story arc was adapted for the small screen by both The Outer Limits (1963), and its 1990s revival, and also by the 1950s EC science fiction comics. The character was also very clearly the inspiration for Jack Kirby's Marvel Comics character Machine Man (a.k.a. Aaron Stack or X-51).

The early stories involving the trial are very straightforward, with Adam himself being the only science fictional element present. In later stories, the plots get either progressively more silly or progressively more awesome, depending on your point of view, as more "adventure story" elements are added, with gangsters and enemy soldiers and finally culminating with Adam and Eve fighting an invasion of bison-headed space monsters all by themselves.

The series of short stories was eventually anthologized as the novel Adam Link, Robot. A very influential work, it's unfortunate that it's so obscure these days. The sheer goofiness of the later stories can hinder appreciation of the brilliant early ones.

Notably, the very first Adam Link story was originally titled I, Robot, well before Isaac Asimov (or rather, Asimov's publisher; Asimov himself was displeased about it) used the title. It fits better here, too, since unlike Asimov's robots, Adam is the narrator of his own story.