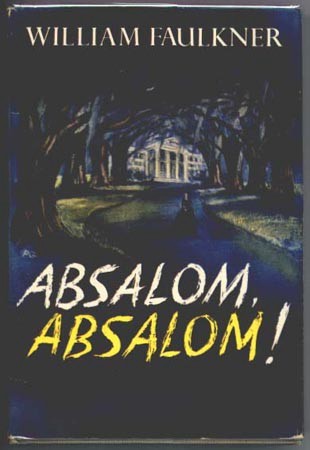 Absalom, Absalom! is a 1936 novel by William Faulkner. Possibly the most dense of his works, it's also very long.

Set, like many of Faulkner's stories, in the fictional Yoknapatawpha County, Mississippi, it is the story of the rise and fall of Thomas Sutpen, who comes to Mississippi to build the next great American dynasty in the decades before, during, and after The American Civil War. Sutpen's story is told by various characters to Quentin Compson shortly before he leaves for Harvard, and Quentin then retells some of it to his roommate before Quentin kills himself, an act detailed in The Sound and the Fury.

The title comes from the biblical (2 Samuel) story of Absalom, a son of King David who murdered his half-brother Amnon, much as Henry Sutpen murders his own illegitimate half-brother Charles Bon in Faulkner's tale.