Literature / About a Boy 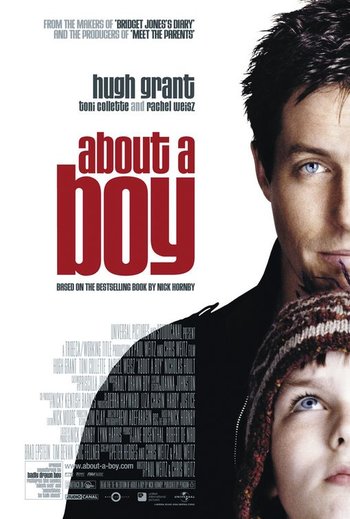 "No man is an island."
Advertisement:

A 1998 novel (set in 1993 and 1994) by Nick Hornby, About a Boy was adapted into a 2002 film directed by Chris and Paul Weitz, starring Hugh Grant and Nicholas Hoult and featuring a soundtrack album by Badly Drawn Boy.

Apathetic bachelor Will, who lives comfortably off of the royalties from a popular Christmas song his father wrote, comes up with the idea to join a Single Parents group in order to pick up single mums, despite the fact that he is childless. This starts off a chain of events in which he meets Marcus, an awkward young teenage boy being raised by a depressed, out-of-touch single mother.

Marcus is constantly bullied at school and feels alone in the world. He gloms on to Will, who merely tolerates him at first but begins to grow attached to the boy and helps him gain confidence, deal with his mother, and win the affection of an older punk rocker girl at his school. At the same time, spending time with Marcus begins to show Will just how empty his life really is.

In the end, Marcus becomes a more socially adjusted kid, Will learns to accept other people into his life, and everyone lives Happily Ever After.

Adapted by NBC into a TV series with the same premise. (A different pilot was also made in 2003, but it wasn't picked up.)

Alternative Title(s): About A Boy