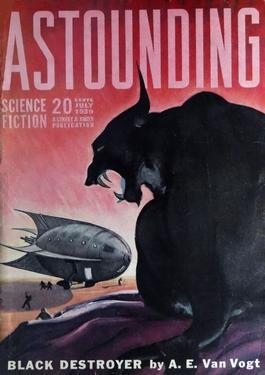 The plot concerns the crew of a spacecraft led by Commander Hal Morton landing on a barren world where they intend to perform an archaeological survey. The group encounters a strange, black-furred, feline alien known as Coeurl, who is apparently the only living thing left on the planet. The creature makes chemist Gregory Kent uneasy, and he advocates eliminating it just in case it's hostile. However, as Coeurl makes no threatening moves of any kind, Commander Morton sides with the expedition's biologists who want to take "pussy" in for study.

Coeurl tamely comes aboard the group's ship, and allows himself to be studied by the humans. In fact, they grow so used to his comings and goings that, aside from Kent, they start taking "pussy" for granted. That is until crew member Jarvey, a friend of Kent's, turns up dead of unknown causes after wandering away into the ancient ruins.

Kent suspects Coeurl — as there is no other life on the planet that they're aware of. It turns out, of course, that he's right; Coeurl is actually the last remaining member of a species that eats the id of living things and had previously wiped out all life on this world. And now he is plotting to steal the humans' ship and escape... after he's done killing them all one by one and absorbing their id, of course!

The story was incorporated into the novel The Voyage of the Space Beagle, and both there and in its original form has been massively influential over the years. Coeurl-like creatures have turned up in everything from Dungeons & Dragons to Final Fantasy. The plot of Alien was similar enough that van Vogt took screenwriter Dan O'Bannon to court over the matter.