Literature / The Voyage of the Space Beagle 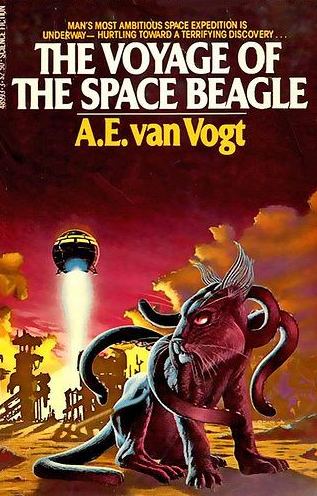 The Voyage of the Space Beagle is a Science Fiction novel by A.E. van Vogt. To be more precise, it is actually a Fixup Novel compiling several short stories that van Vogt had written for a magazine years before (including the first two he ever wrote). All the stories had in common the involvement of the Space Beagle, an Earth starship sent to explore new areas of space, encountering ever more fantastic — and dangerous — alien lifeforms along the way.
Advertisement:

A recurrent theme of the stories was that one of the ship's science officers gives a warning of danger, but is ignored and always ends up having to save the crew by himself.

Although obscure today, the stories were enormously influential; to the point that some of the creatures van Vogt invented have been openly imitated, most notably the telepathic, cat-like Coeurl (which became a recurring monster in the Final Fantasy series, as well as the inspiration for the Displacer Beasts from Dungeons & Dragons) and even the xenomorphs from Alien might have been based on van Vogt's work (he certainly believed so).

Tropes in the stories: