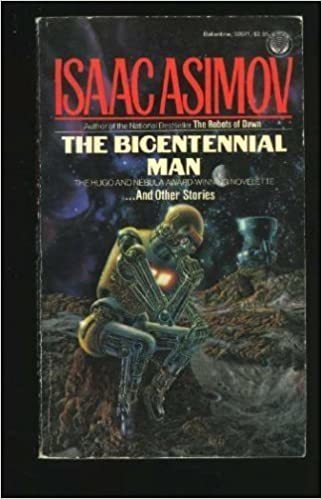 First published in Stellar #2 (1976), by Isaac Asimov, this Science Fiction Novelette is about Andrew Martin, a Robot Butler, as he pursues his dream of becoming human.
Advertisement:

The story starts In Medias Res, with Andrew arranging a surgery that will affect the last robotic organ in his body. Then we return to his earliest days, working in the Martin household, with "Sir and Ma'am and Miss and Little Miss." During this time, he was a Robot Butler and lady's maid, a household staff of one for a politician in the World Council. He spent many decades in their service, but his quirks became apparent early on, as he surprises everyone by carving sculptures.

As time passes, the Martin children grow up and leave the house. Little Miss helps Andrew convince Sir that he should be free, and Andrew uses the money from his art to purchase a house and freedom from the family. He goes on to be a famous writer, and then a designer of life-like prosthetics. At every step of the journey, he works with the law firm Feingold and Martin. They help protect him in legal struggles, especially against United States Robots, which hates his unusual quirks and creative ability, because they represent a lack of predictability.

Andrew designs the prosthetics to more closely imitate human life, but his dream of becoming human is blocked by his positronic brain. The World Congress refuses to recognize a robot as "human", despite being more organic-based than the average person.

The story was expanded into the 1992 novel The Positronic Man, co-written with Robert Silverberg. The 1999 film Bicentennial Man was based on the novel and novelette.

"The Bicentennial Man" contains examples of: