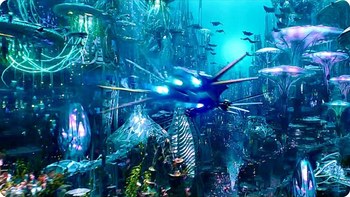 Just look at the world around you
Right here on the ocean floor
Such wonderful things surround you
What more is you lookin' for?
— Sebastian, "Under the Sea", The Little Mermaid (1989)
Advertisement:

Most people would not consider much what was going on underwater, despite it making up 70% of the world. Given how humanity cannot survive underwater without special equipment that was only developed recently, it does make a fair bit of sense.

Yet, when people were finally able to go underwater, they discovered how breath-taking it all isnote and not just because you can't breathe there.

Thanks to the endless potential of fiction along with the growing advancements in technology and science for underwater exploration, many creators have been awed at the abundance of life and mystery held beneath the waves. Beyond the strange and exotic-looking creatures is the fact that it remains unexplored, maintaining this sense of mystery under the waves.

Then there are the centuries of lore and mythology associated with the ocean since humanity first set out to sea. Besides the classic romance of sailors and explorers with the sea, humanity has always maintained fascination with what magical or monstrous beings lived underwater, a new world where humanity could not tread. This has been reflected in various folktales and stories in all sorts of human mythologies. Combine this with the potential discovery for ruins of ancient or modern human creations, and you have an underwater world of awe. Awe-derwater, if you will.

Probably contains an Underwater City (usually Atlantis) inhabited by mermaids, Apparently Human Merfolk and or Fish People. For wildlife, you will find Sea Monsters, fish and dolphins, both playful and heroic (however, beware the devious sort).