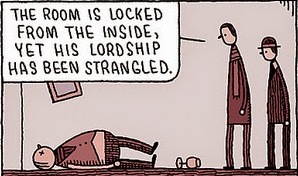 "His lordship must have strangled himself by surprise!"
"The door had been locked from the inside. The windows were barred, locked from the inside, didn't open and were made of brick. All the books were chained to the shelf save one, open on the table at a page entitled 'How to secure a room from the inside'. All the boxes had been ticked. And even the pen used to make the ticks was one of those ones on a little chain you get in banks."
— John Finnemore's Souvenir Programme
Advertisement:

A seemingly impossible crime, the standard example being that of a murder victim found in a room with only a single door, securely locked from the inside. Can be the basis for a single plot, or an entire show. A well-designed Locked Room Mystery provides pleasure from trying to figure out the puzzle before it is revealed, from moments of dawning realisation, and from a satisfyingly logical solution. A poorly designed Locked Room Mystery only provides a feeling of having been cheated. Contrary to the name, Locked Room Mysteries don't necessarily have to be murders or take place in locked rooms, just to be crimes that seem to be impossible at first glance (e.g. contemplating how it's possible for someone to travel from one part of the island to another within minutes). The question of who is rarely as interesting in this kind of plot as how.

Originally from crime fiction, John Dickson Carr being an acknowledged master. It is noteworthy that Edgar Allan Poe's short story The Murders in the Rue Morgue, widely considered to be the first detective story, involves a Locked Room Mystery.

Appears on television in a number of forms. The relatively pure form as a sub-genre of crime television (e.g., Monk, Jonathan Creek) where the puzzle is eventually unraveled by an eccentric protagonist using subtle clues and pure reason.

The part of the show where the solution to the mystery is explained is The Summation. One common trick used is the Time-Delayed Death — for others see the Analysis page. Expect the police to have found that The Key Is Behind the Lock when the crime scene was discovered. If a murder victim turns up someplace that's just so weird it's hard to explain, that's Body in a Breadbox.

Compare Fakeout Escape where somebody held captive invokes this trope to escape from the room.