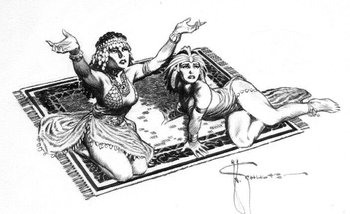 "Whence came Natohk?" rose the Shemite's vibrant whisper. "Out of the desert on a night when the world was blind and wild with mad clouds driven in frenzied flight across the shuddering stars, and the howling of the wind was mingled with the shrieking of the spirits of the wastes. Vampires were abroad that night, witches rode naked on the wind, and werewolves howled across the wilderness. On a black camel he came, riding like the wind, and an unholy fire played about him; the cloven tracks of the camel glowed in the darkness. When Natohk dismounted before Set's shrine by the oasis of Aphaka, the beast swept into the night and vanished. And I have talked with tribesmen who swore that it suddenly spread gigantic wings and rushed upwards into the clouds, leaving a trail of fire behind it. No man has seen that camel since that night, but a black brutish manlike shape shambles to Natohk's tent and gibbers to him in the blackness before dawn."
Advertisement:

" is a Conan the Barbarian story by Robert E. Howard. First published in June, 1933.

Princess Yasmela has been having terrible nightmares about a large black shadowy figure, who claims he is coming for her. To make matters worse, out in the desert, a dark figure has been uniting the scattered tribes and ravaging the countryside, and soon they will be at the city gates! Action must be taken, and, after receiving advice from her patron god, she goes looking for someone to lead her forces to victory against the evil hordes. And who should happen to be there but Conan?