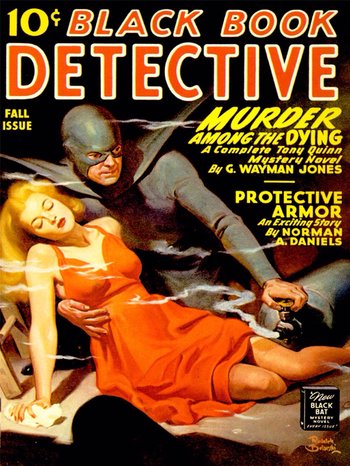 Black Bat is a 1930s pulp fiction character by Pines Publishing that was introduced in a 1934 issue of Popular Detective.

The Black Bat's first appearance was in the story The Bat Strikes Back by to C.K.M. Scanlon. In it, an investigative journalist is framed for a murder and sentenced to be executed. Sympathetic police officers stage his execution and the protagonist is let back onto the streets. With plans of revenge against the criminals that set him up, the secret identity "the Bat" is born after the main character gets inspired by a bat who flew through an open window. The Bat's way of protecting his identity is a simple black hood with a bat emblem on it. He carries around a gas gun to knock enemies unconscious. The Bat's way of fighting crime was knocking his foes out and leaving them tied up, with a bat logo on their foreheads, for the police to jail.

This original incarnation of the Black Bat, then simply called "the Bat", starred in four pulp stories before being discontinued. Several years later in 1938, he was retooled as a caped superhero to bank off the success of characters such as Superman.

This version of the Black Bat was originally written by G. Wayson Jones in the magazine Black Book Detective. Anthony "Tony" Quinn is a district attorney fighting against the criminal underbelly. During one trial, a suspect throws acid at Tony and blinds him. Tony goes into seclusion until he's visited by a mysterious woman named "Carol Baldwin". Carol's dying father wants to repay Ton for helping him in the past by allowing Anthony to undergo a secret, new surgical operation in order to transplant his eyes. This surgery not only restores his sight but also gives him powers including night vision, radar senses, and super-strength. Tony uses his newfound abilities to fight the criminal underworld by hand. He begins wearing a costume and fighting as "the Black Bat". The Black Bat is known for leaving bat-shaped paper stickers on his victims so that innocents couldn't be framed and criminals would fear him.

Amongst Tony's allies are Carol, a resourceful young woman who works undercover with gangs, and Butch O'Leary, a not-so-smart but strong and loyal fellow.

The Bat predates Batman by several years. Their similarities are considered coincidental. If speculation on The Bat's creator is true, they were both inspired by Zorro, explaining their similarities. However, the retool, The Black Bat, was released only a few weeks after the first issue of Batman. Both DC and Pines threatened legal action against the other for plagiarism (with added allegations that Batman was plagiarizing another character, The Phantom Detective, as well)note While it's up in the air whether either plagiarized each other, it is known that Batman's glove design was inspired by the Black Bat's. The lawsuit was settled out of court, with DC agreeing not to get into pulp magazines while Pines agreed not to turn Black Bat into a comics character. Pines got around this by rewriting Black Bat's origin in comic book form as The Mask Strikes (explaining why The Mask originally wore a bat-looking cowl).

Despite the Black Bat being forgotten by most, it was one of the longest-running pulps. He appeared in stories from 1938 to 1953. In Germany, the stories lasted even longer.

Black Bat has since fallen into public domain with the fall of pulp magazines. A Legacy Character Black Bat character was introduced in 2011's Education of a Superhero. He has his own series called Legacy of the Black Bat. DC also has their own "Black Bat" character in Cassandra Cain's second alias.