Literature / The Tower of the Elephant 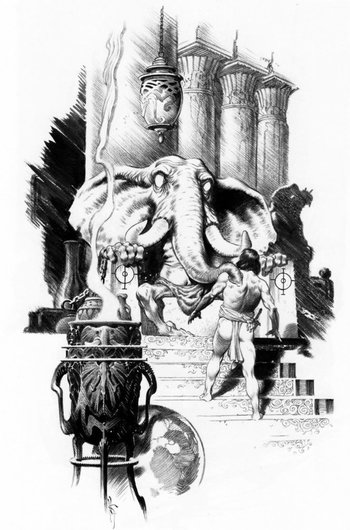 "The Tower of the Elephant

" is a Conan the Barbarian story by Robert E. Howard. First published in March, 1933. It is generally considered one of the best of the Conan yarns and often recommended as a starting point for new readers.

A very young Conan hears of a mysterious tower and goes to steal from it. He meets up with Taurus of Nemedia, one of the undisputed masters of thievery, and together they tackle the tower and brave its various hazards. After losing Taurus to a Giant Spider and killing it, Conan meets up with the Tower's most unusual occupant, a being from beyond the stars enslaved by the Evil Sorcerer who calls the tower home, who reveals to him much about the ancient history of his world before charging Conan with carrying out his vengeance against the sorcerer after three hundred long years.

Being one of Robert E. Howard's most popular and well known stories, it has of had dozens of adaptations. Marvel Comics adapted the story multiple times, in both their Conan the Barbarian and Savage Sword of Conan books, as have Darkhorse Comics in their ongoing Conan comic. The live-action Conan the Adventurer adapted the story for its opening arc, and used the villain Yara as its overarching villain. Even the cartoon featured Yag-Kosha. Conan the Barbarian (1982) adapted parts of it as the first raid on Thulsa Doom's cult, and Conan the Barbarian (2011) makes a direct reference to it in that version of Conan's backstory.

This short story is also notable for demonstrating the falseness of the modern claim that a story can not be simultaneously High Fantasy, especially mythic fantasy, Low Fantasy, and Cosmic Horror, for the story is all three and more, from a time before these subgenres had become standardized and purists tried to keep them separated.

Yag-Kosha or Yogah, the elephant-like creature of the title is notable for being possibly the inspiration for the "Space Jockey" (later revealed to be called Engineers) of the Alien series.