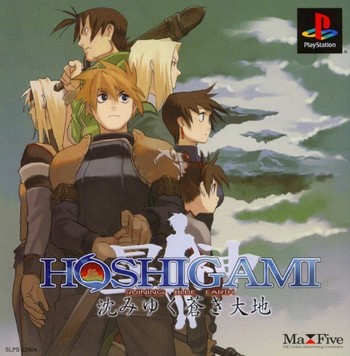 Hoshigami: Ruining Blue Earth is a Strategy RPG released on the PlayStation 1 in 2001, and mostly known to its audiences for being Nintendo Hard.

The game begins in the Floating Continent of Mardias, where Heterosexual Life-Partners Fazz and Leimrey—who are mercenaries—are just hanging out minding their own business. Unfortunately, The Empire, Valaim, attacks Fazz' now-Doomed Hometown. Leimrey gets separated from Fazz, who goes off on a journey to recover his friend. In the process, Fazz discovers that this game's particular brand of Green Rocks, "Coinfeigms," are bad because using them causes irreparable drain on The Lifestream — and that various forces are conspiring to bring about The End of the World as We Know It via this very mechanism. Fazz, being The Hero, decides he's not going to stand for this. A Cliché Storm of Gameplay Ensues.

Coming out on the heels of Final Fantasy Tactics and marketed as a Spiritual Successor because many of the same programmers worked on both games, Hoshigami featured Sprite/Polygon Mix graphics, a Class and Level System, and grid-based gameplay, just like FFT. However, there the similarity ends. Hoshigami's class system is much more limited: characters can worship one of six gods, which gives them access to a Weapon of Choice and an alignment on the Elemental Rock–Paper–Scissors hexagon (catalogued below), and that's it- none of the Mix & Match which made FFT so fun. Coinfeigms had particular spells engraved on them and could be customized as well as leveled up, an arrangement which, though not uncool in its own right, simply increased the feeling that the game was derivative of other recent acts. The damage modifiers were pretty messed up: you expect lower damage when attacking head on, sure, but how about about doing 100 times more damage when you Back Stab? (Oh, and, the fact that the enemy always outnumbers you means that there's only one person who's going to be taking that 100x damage up the booty, and it's not the AI.) Finally, MaxFive's brave attempt to avert Death Is Cheap simply drove home why that trope is an Acceptable Break from Reality: any character who wasn't a Required Party Member (and very few were) could die, and if they did, you had to recruit a brand-new Player Mook and train him up from scratch. This Forced Level-Grinding did not go over well with players — especially when combined with the Nintendo Hard difficulty level which practically guaranteed at least one soldier lost per battle.

On the plus side, the Coinfeigm system was appreciated by most reviewers, as was the RAP system: instead of characters having one saunter and one action per turn, every square moved, sword swung, spell cast or special move deployed would add to the character's "Ready for Action Points" Gauge. Nominally, once the gauge was up to 100 RAP, the character's turn was over, but you could keep filling it past the 100% mark if you had a Goddamn Bat to kill or a character who needed to limp to safety. Of course, that just slowed down that character's next turn, which would only arrive once their RAP Gauge had emptied again, so it paid to think twice before you overloaded your character with RAP and abandoned him in an exposed position. This system was well-received by reviewers and players, and, with little modification (changing to a count-down-from-100 "Action Points" system) was reused in the team's next project.

The game also featured a Combination Attack system in the form of "Shoot" attacks and "Sessions". "Shooting" an enemy would push him back one square ("back" being relative to whatever direction the shooter was facing), which was handy in, say, knocking opponents off cliffs. But, if you knocked him into one of your characters who had been told to wait in "Session" mode, that character would Shoot the baddie again. With some care you could set up a Session that involved all six of your characters, which practically guaranteed a One-Hit Kill (well, six-hit kill) and significantly upped the chances that some of the victim's equipment would be Randomly Dropped.

The game was eventually remade for the Nintendo DS as Hoshigami Remix; despite efforts on the developer's part, it was still hard and tedious. A PlayStation 2 Spiritual Successor, Stella Deus: The Gate of Eternity, got better scores: while it was still a Cliché Storm and didn't feature much in the way of Replay Value, at least it wasn't Nintendo Hard.