The Ruins I Caused 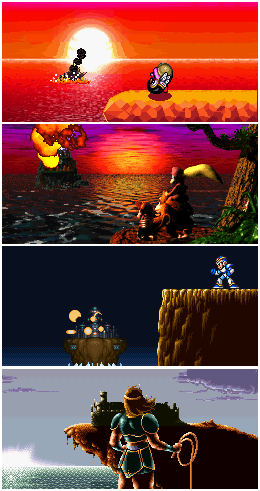 You're an Ace Operative, tasked with infiltrating and then destroying the base of operations of the Nefarious Nine Eye Army. You get in, you get out, and you set enough explosives to make the Great Tokyo Fireball look like a firecracker. You're tempted to just walk away, the flash will blind you and people a mile away, but... you've got shades, and who doesn't want to look at their handiwork?

Effectively, this trope is when characters bring destruction to a rather large structure and escape, typically by the skin of their teeth, in time to manage to get a good view from above of the destruction taking place. Scenery Gorn tends to ensue.

Expect a sillhouetted shot of the hero and/or Damsel in Distress as they engage in an After-Action Villain Analysis. For the inverse situation, where the hero has to watch a place he cares about go down in flames, see Watching Troy Burn.

While both tend to involve looking down from a height at scenery, this is not to be confused with The World Is Just Awesome. Compare Collapsing Lair.

at the ruins of Carthage invoking this trope. It is almost certain that he was using Troy as a Roman à Clef for Rome itself.

Alternative Title(s): Above The Ruins, Gaze Upon Your Devastating Handiwork, Ruins Of Guilt, Surveying Your Destruction