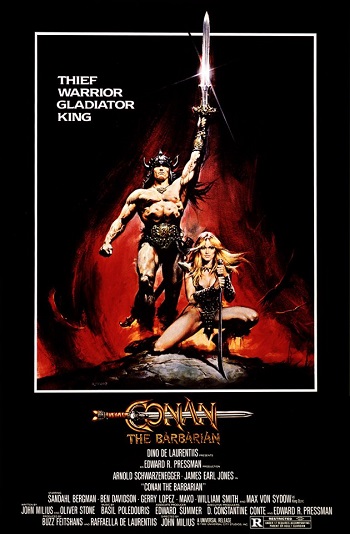 "That which does not kill us makes us stronger."
"Fire and wind come from the sky, from the gods of the sky. But Crom is your god. Crom, and he lives in the Earth. Once, giants lived in the Earth, Conan. And in the darkness of chaos, they fooled Crom, and they took from him the enigma of steel. Crom was angered; and the earth shook. And fire and wind struck down these giants — and they threw their bodies into the waters, but in their rage, the gods forgot the secret of steel and left it on the battlefield. And we who found it — are just men. Not gods. Not giants. Just men. The secret of steel has always carried with it a mystery... you must learn its riddle, Conan. You must learn its discipline. For no one — no one in this world can you trust. Not men, not women, not beasts... this you can trust..."
— Conan's father, touting The Riddle of Steel
Advertisement:

Conan the Barbarian is a 1982 film produced by Universal Pictures in association with Dino De Laurentiis, starring Arnold Schwarzenegger as Conan the Barbarian, James Earl Jones as Thulsa Doom, Mako as The Wizard and Sandahl Bergman as Valeria. It was directed by John Milius, who co-wrote it with Oliver Stone. The highly regarded soundtrack was composed by Basil Poledouris.

The film put Nietzschean philosophy together with an epic tale of revenge. While it wasn't very accurate to the original Robert E. Howard pulp stories, hewing more to Stone's ideas filtered through Milius' direction, it has become a Cult Classic. It helped propel Schwarzenegger to mega-stardom.

It had a 1984 sequel, Conan the Destroyer, which took a Lighter and Softer tone under a new writer and director. A second sequel, with the same director as Destroyer, morphed into Red Sonja, with Schwarzenegger playing a character who officially wasn't Conan.

A Continuity Reboot, also called Conan the Barbarian, came out in 2011. Another sequel is currently in the works. Titled The Legend of Conan (or possibly King Conan), it is stuck in Development Hell but there are assurances (from Schwarzenegger himself no less) that the movie will happen at some point. It will also completely disregard Conan the Destroyer.

Let me tell you of the tropes of high adventure!

And if after reading this article, my life is ruined... then to hell with you!