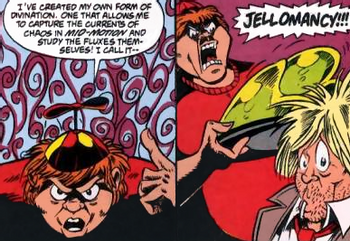 A standard naming convention for specialized magic- (or magic-equivalent-) users: they are referred to as somethingmancers, and their specialized form of magic is called somethingmancy. The something is usually the Greek word for the thing or some other acceptably important-sounding term for it. As an example, death mages are known throughout all of fiction as necromancers. This structure makes it quite easy to create names for branches of magic using just about anything you can think of. You use fire? You're a pyromancer. Water? Hydromancer. Ice and cold? Cryomancer. It's that simple.

A notable variant is when people with Psychic Powers get classified by the suffixes "Kineticist" and "Kinesis". So a fiery psychic is a pyrokineticist/pyrokinetic, a water-controlling psychic is a hydrokinetic, a cold-manipulating psychic is a cryokinetic and so on with the endless possibilities of Greek and Pseudo Greek. Also if a work features a Fantastic Science, there's a good chance that it's going to have a similar naming scheme.

Technically, the -mancy and -kinesis suffixes are both misnomers. "Mantia" stands for divination, making "Necromancy" the mystical practice of communicating with the dead but not necessarily bringing them Back from the Dead. "Kinesis" is "Movement", and thus might refer to being able to manipulate something but not will it into being. A more appropriate term would be "-urgy", meaning "work" or "shaping", but conjoining it with a term requires the first part to end with a consonant (as in, "Metallurgy"). See the analysis tab for further details.

A very pervasive trope, and old enough that it's very prone to being played with or even parodied. Theoretically, anything could become a "mancy", no matter how silly or ridiculous it may sound, since there's historical precedence of old psychics doing all sorts of divination with the randomest of things.

See Necromancer for a common specific subtrope. The Pornomancer sounds like a subtrope, but only uses the same naming convention.

Meet the -Mancies of true divination!

open/close all folders
A to D