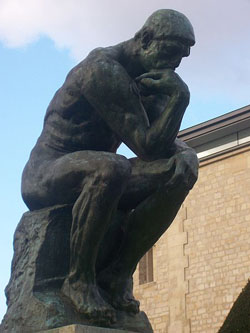 Pondering life, the universe, and everything, perhaps?
"The Thinker, huh? I know what he's thinking about! 'How come there's no TV set?'"
— Eustace, Courage the Cowardly Dog
Advertisement:

note which is only a small part of his The Gates of Hell, a sculpture based on Dante's Inferno has been imitated countless times as a stock pose. Rodin actually took this pose from Classical Greece; sculptures and paintings of people positioned similarly are generally meant to convey introspection and melancholy. Slouch of Villainy can be a villainous version when done on a throne.

A common gag in comedy shows of less good taste is to have a character do this pose while seated on a toilet.

A subtrope of Art Imitates Art.