Every Japanese Sword Is a Katana 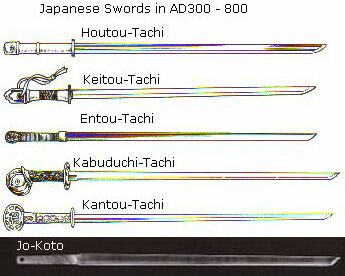 They all look the same to me...
Frank Washington: What does "katana" mean?
Joe Marshal: It means "Japanese sword".
— Samurai Cop
Advertisement:

Japanese swords have evolved throughout Japanese history. That fact is entirely lost in popular culture, however, in which Japanese swords, regardless of design, are referred to as "katanas," because Katanas Are Just Better. In reality, the katana is a fairly recent weapon, relatively speaking, and hadn't been introduced yet during the classical period portrayed in many Jidaigeki films. That people in Japan sometimes use "katana" as a generic term for "sword", regardless of type, does not help to alleviate the confusion.

Types of Japanese swords include:

See the UsefulNotes.Swords page for more about, well, swords. Please note that because of the nature of this trope's description, all examples below will be subversions and aversions.