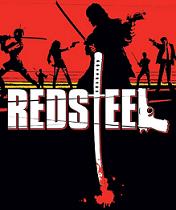 Oh, look at those fish! Are they not pre-?

Red Steel is not about fish, sorry.

You, Scott Monroe, begin the game viewing some fish with your fianceé, Miyu Sato, right before a nice dinner the day you are to meet her father, Isao Sato. Unfortunately, rival yakuza aiming to take over the Organization (that Isao turns out to lead), kill Isao Sato, and get the Katana Giri, Sato's sword and symbol of his leadership. This ends in Miyu being kidnapped, and Isao being betrayed and dying, but not before entrusting the sword to you. You shoot and slice through Los Angeles to LAX where you get knocked out right after seeing the plane with your fiancee take off.

You then follow your fianceé to Tokyo, where you get acknowledged as Sato's successor by the Sanro Kai, a Yakuza board of directors (after shooting or slicing their subordinates), which then asks for your help in defeating Tokai, the Big Bad and the one holding your fiancee captive. You proceed to slice, shoot, and/or spare his subordinates.

Red Steel is a First-Person Shooter game released by Ubisoft, and the first game ever designed specifically for the Wii. This game has become infamous for its gameplay mechanics since before it came out due to its rushed release (the bane of every launch game), late design changes, and unfamiliarity with the new motion control scheme (especially expectations of 1:1 motion).

If you're looking for the In Name Only sequel, see Red Steel 2's page. For the Dungeons & Dragons setting of the same name, see Mystara.