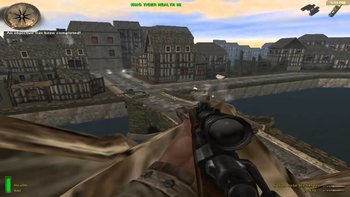 "Now I knew how to get Muller - one true shot from the Flak Tower to his Command Tower."
"But the Russians had closed in, cutting me off from my designated vantage point. I'd have to cross the Front Line, past the attacking Reds, and infiltrate one of the most heavily defended fortresses in Berlin. This is what I train for, just me, my rifle, and a target."
— Lt. Karl Fairburne, Sniper Elite V2
Advertisement:

A Sniping Mission is when the player is tasked with using a long-range weapon to attack far-away targets.

Many sniping missions are also Escort Missions. In these, the player, situated over a great distance with a long-range weapon, must eliminate enemies who are trying to prevent an NPC from completing some task, be it reaching the exit, activating the consoles, planting the bombs, or what have you. Occasionally, it overlaps with Assassination Sidequest, in which you need to assassinate a specific target.

Many boss fights incorporate sniping elements, such as famously those in the Metal Gear series. This might occur if you are attacked by an enemy sniper and try to Beat Them at Their Own Game in a Sniper Duel.

Is often an Unexpected Gameplay Change.