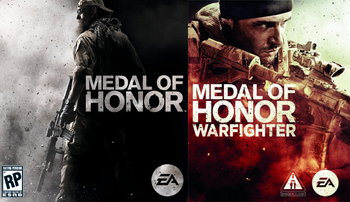 In 2010, following the runaway success of the Call of Duty: Modern Warfare series, the Medal of Honor series was rebooted and brought into a modern-day setting, with gameplay re-tooled to be closer to the style of Modern Warfare. A sequel to this 2010 reboot was released in 2012, called Medal of Honor: Warfighter.
Advertisement:

The new Medal of Honor games distinguish themselves from the new Call of Duty games (as well as the newer Battlefield games) in that the plot and atmosphere are intended to be much more "true to life", focusing on the Invasion of Afghanistan and later the War on Terror, without Hollywood embellishments such as runaway nukes or rogue Russian special forces divisions with genocidal ambitions.

In terms of multiplayer, the games are designed to feature smaller-scale, infantry-focused engagements compared to the large-scale combined arms gameplay of Battlefield, while still being more tactical and less arcade-like than Call of Duty. The multiplayer in the 2010 Medal of Honor was outsourced to DICE (developers of said Battlefield games), and even used a different engine (Unreal Engine 3 for singleplayer, Frostbite 1.5 for multiplayer).