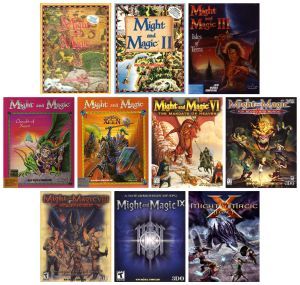 Might and Magic is a Science Fantasy cycle of first person party-based PC RPGs, later spawning some spinoffs such as the Heroes of Might and Magic Turn-Based Strategy games.
Advertisement:

Jon Van Caneghem created the first game in 1986, and it became the first series to seriously compete with the Wizardry and Ultima franchises amongst role-players. The first five games were introduced under his New World Computing company, before they were bought out by 3DO and Executive Meddling began.

The games' definitive trait has always been Science Fiction elements beneath the surface of an otherwise Standard Fantasy Setting game.note Up until X, which, due to taking place in the standard fantasy setting of Ubisoft's Heroes, is by the developers' statements prohibited from veering from the canon by having science fiction elements. Usually, the climax reveals that ancient Precursors are responsible for lots of what is going on in the world, and the Big Bad is a robot or an alien. Indeed, as it overlaps with the HOMM series, it turns out that Devils from HOMM3 are actually aliens. How Unscientific!.

In terms of gameplay, Might and Magic games are all centered around first-person party-based Dungeon Crawling in an open world. The games heavily emphasize combat and puzzle-solving over story and character interaction. Dialogue is kept to a minimum.

The first game of the series had a rather non-linear plot for its time (though it lacked most elements of the modern Wide-Open Sandbox). Its maps were flat areas made of discrete tiles, and all movement happened in the four cardinal directions, one ten-foot "step" at a time. The engine used sprites to simulate a 3D view, and combat was turn based.

In the first two games, the action was set on flat, square worlds orbiting in space. The third moved the action to a "round" (actually toroidal) planet. M&M 4 and 5 were set on XEEN, another flat platform, with a twist: the world of M&M 5 was Darkside of XEEN, literally the flip side of the world from number four. Installing both 4 and 5 allows your party to travel between the two sides of XEEN. All these games have the player pitted against Sheltem, a Planetary Guardian constructed by the Ancients, who went rogue and decided to protect his homeworld by blowing up all other worlds. Sheltem is finally defeated in M&M 5, bringing an end to that whole plot arc.

M&M 6 started a new story arc in the series. It switched to a different kind of graphics: instead of flat tiles it became a true 3D world, with 2D sprites for characters and monsters, and the option of real-time combat. (Think Doom, but with large outdoor areas.) The setting moved to the world Enroth, where HOMM and HOMM2 had taken place, joining the continuity more tightly with that of Heroes of Might and Magic.

The plot of this one concerned an invasion of the world by Devils. Said Devils turn out to be alien enemies of the Ancients, and defeating them involved unearthing some of the Ancients' Lost Technology. Along the way this plot traded points back and forth with the HOMM games. For instance, Archibald Ironfist, an evil mage defeated in the canonical ending to HOMM2, was freed in Might and Magic 6, returned in Might And Magic 7 and helped free a character who then showed up in an addon to HOMM3.

Might and Magic 7 was effectively more of the same and was tied very closely to Heroes III and Might and Magic III. So did Might and Magic 8, with a rapid scale-back to fantasy rather than science fiction and a nod to the pre Might and Magic 6, making the party consist of on-the-road changeable crew members from a single person to five, and a darker, more mysterious and exotic continent as opposed to the knightly Enroth or light High Fantasy Erathia. But you could have dragons, vampires, trolls and minotaurs in the party in 8, so this makes it cool.

Might and Magic IX almost happened, but what we got instead was such that many fans wish they hadn't even bothered. The same goes for a number of failed spinoffs, such as the action-RPG Crusaders, the King's Bounty remake Quest for the Dragon Bone Staff, and the Counter-Strike clone Legends.

Heroes of Might and Magic V represented a complete reboot of the series after Ubisoft bought the rights from the bankrupt 3DO, with a new developer (Nival Interactive), and taking place in a new, purely fantasy-based universe with no ties to previous games. Dark Messiah of Might and Magic is a first-person hack & slash action game that takes place in the same world as HOMM5.

Might and Magic: Duel of Champions, an Allegedly Free Trading Card Game that uses the mythos and factions, was released in 2012.

The In Name Only online PvP game Might And Magic Showdown was released on Steam Early Access on the 20th of January 2017. After failing to attract a playerbase, it was cancelled and the servers were shut down six months later.

This video game series contains examples of the following:

Alternative Title(s): Might And Magic VII For Blood And Honor